We landed at Athens International Airport. 23 degrees in November, the sun is shining. Wow. 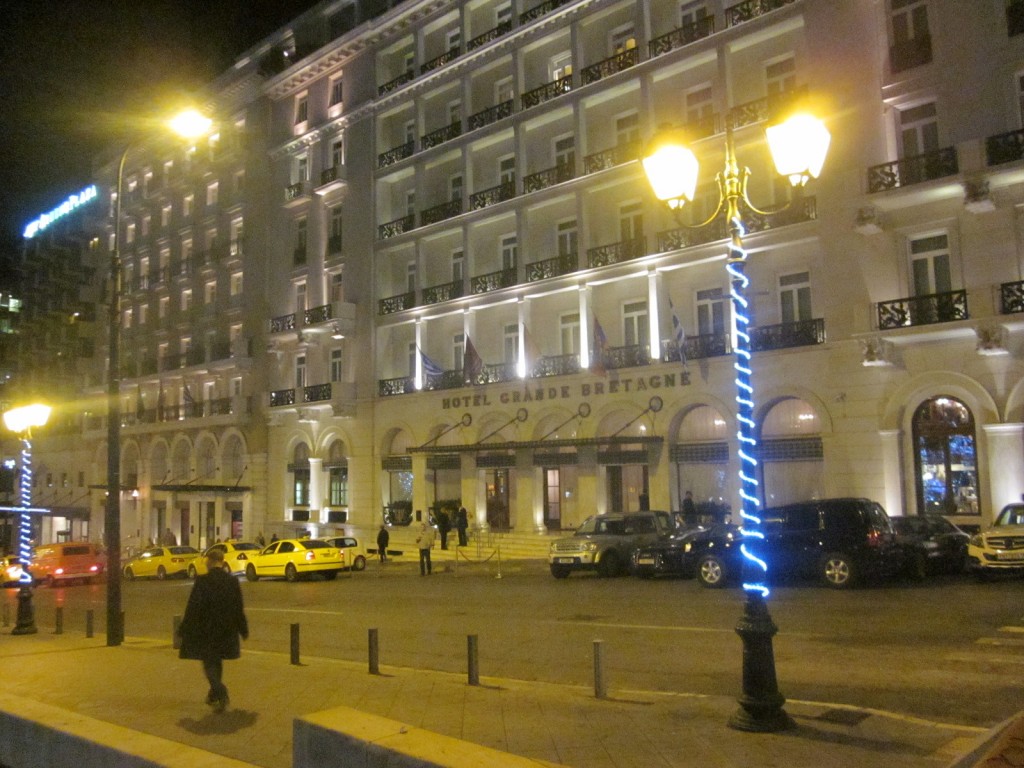 Athens – the metropolis has -even during the crisis- developed a appetite for fine cooking, star cuisine, new wines -of course from Greece- and style. It is such a lovely city, a mix of modern buildings among the ancient monuments like the Acropolis that defines this city. My favourite district is Plaka.
It possesses all the elements I need for inspiration and my travel stories.

I have checked in at the Grande Bretagne. It is part of “The Luxury Collection” by Starwood hotels & resorts. It is the most elegant hotel in Athens, located in central Athens opposite to Syntagma Square, on the corner of Vasileos Georgiou A.

The hotel was built 12 years after Greece’s independence from Ottoman Rule.

It has a long story during WW2 the hotel was the Greek General Headquarters, during the German occupation of Greece, the hotel served as German headquarters, the british army “used” the hotel at war’s end in 1945.

Lots of history; revolutions, two wars, strikes and in 2006 a big renovation to restore the hotel to its former glory.

There are 321 comprehensively renovated rooms and suites, including a 400 square metre presidential suite.

The Luxury collections hotels subscribe to their unique conceptual orientation.

They are all united by an ambition to provide each guest with made to measure service.

This magnificent residence gave me a fantastic time. 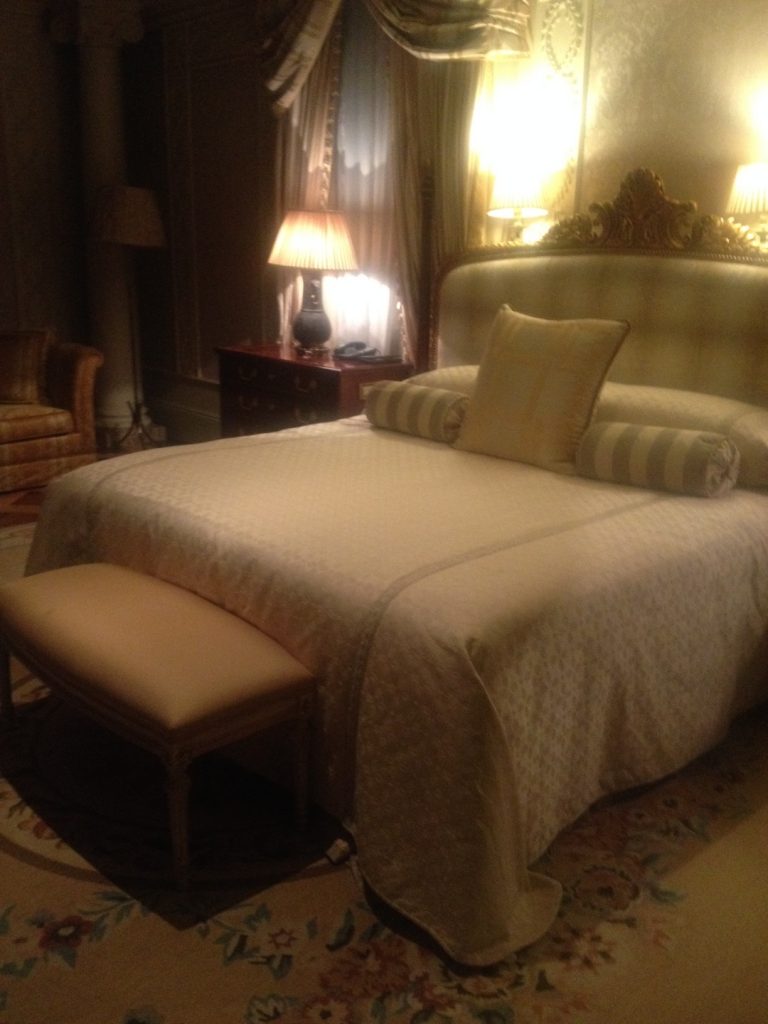 A highlight in every sense of the world. Entering the lobby the sophisticated domicile revelas its elegant ambience. 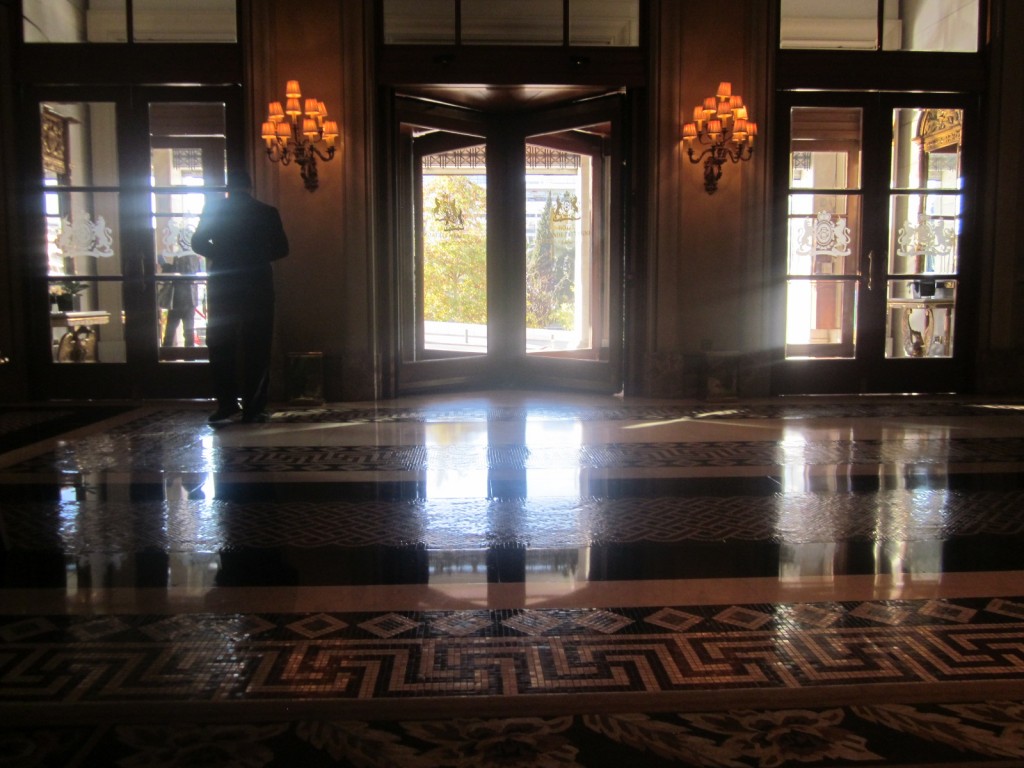 At the Grande Bretagne you will find every nice stylish things, handmade furniture, the bathrooms are in marble, thhe beds are very comfortable with high thread count sheets and a choice of pillows. 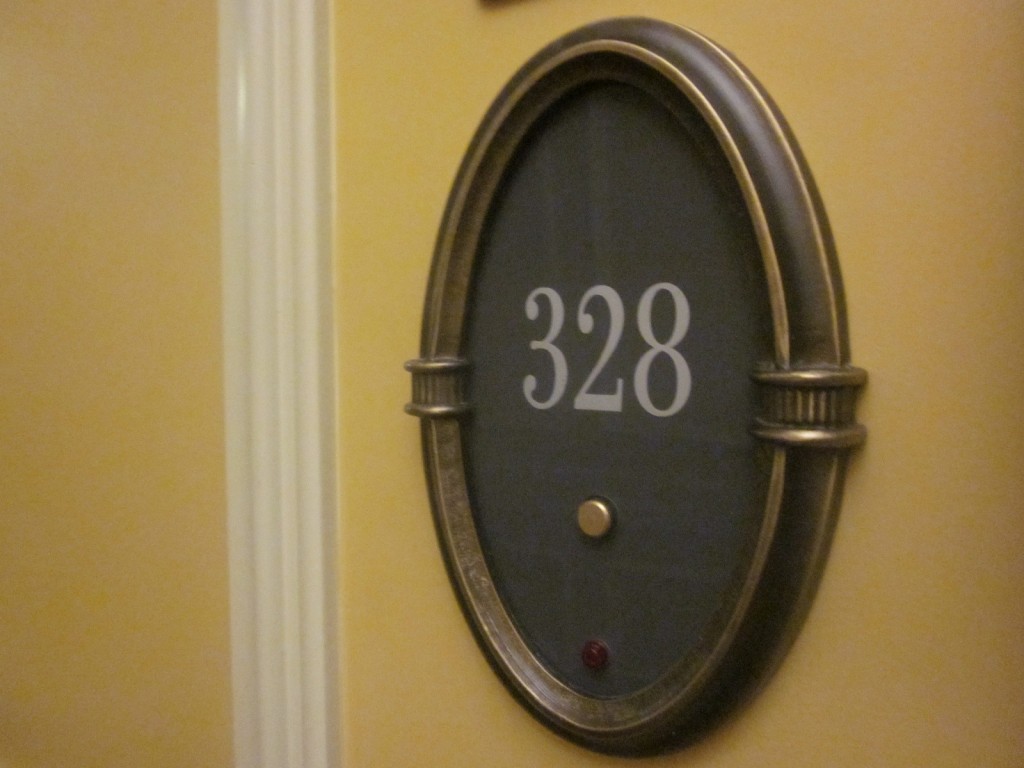 Being a Grand hotel, all the rooms have all the usual amenities like room service, nice toiletries, bottles of water and a well equipped mini-bar.

The rooms at Grande Bretagne are very quiet even though the hotel is on a busy square.
I had a lovely view to the Syntagma place. A lovely breakfast at the roof terrace where the buffet breakfast is served. The roof also houses a swimming pool which is lovely for sunbathing in summer.
And all this with a view on acropolis.

The very extensive buffet breakfast offers nice greek products, like honey, walnuts, olives, the usual cereal, muesli and cooked breakfast in greek style. You can order eggs cooked in the style you want and in the hot trays are selections of sausages, bacon and other savoury items.
Lovely.

Freshly squeezed juices, vast baskets of fresh fruits and of course Greek Yoghurt with local honey is laid on too. I got a seat facing the Acropolis. A big wow, although I had it already in Hotel Electra Palace in October.

Its is so nice having your breakfast with eyes on newspaper and one of the great historical monuments.

Within walking distance to the hotel is the old town Plaka where you will find tavernas for tourists but also a welcoming environment. Plaka has been modernised but you still get the feel or ancient Greece here. 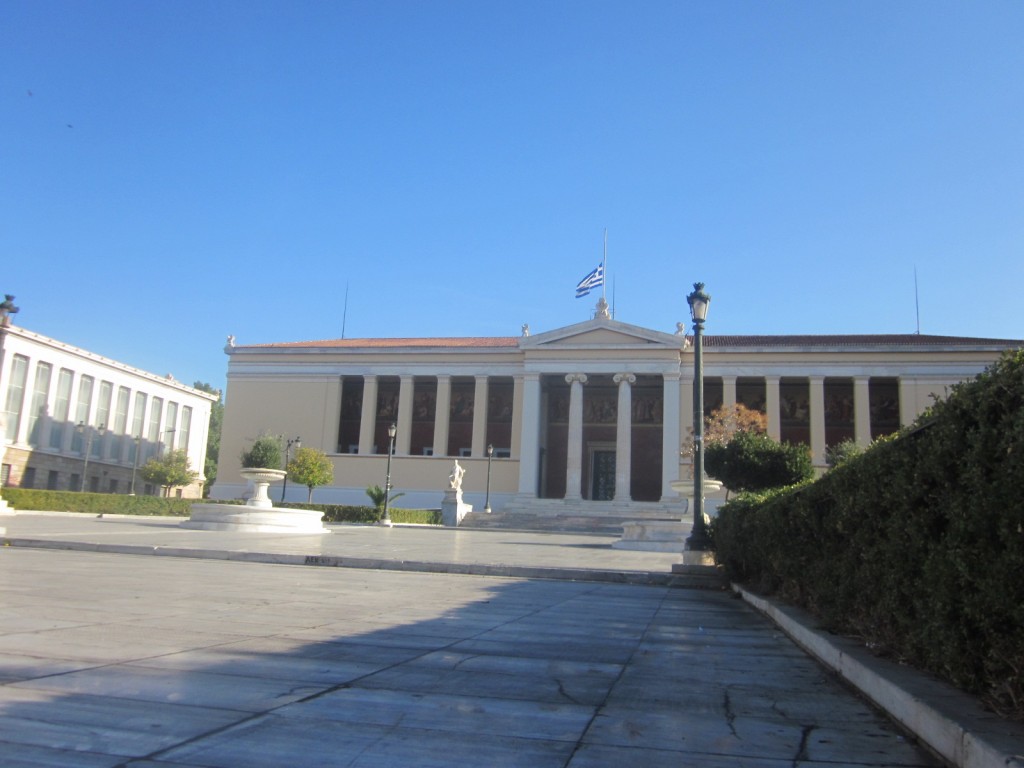 On Syntagma square itself is the Parliament which used to be the King’s Palace. Guards dressed in traditional costume guard the this and the tomb of the unknown soldier.

You have to catch them changing guards as they do the most unique march with their tasselled shoes.

Our culinary wishes are fullfilled, in the same building of the hotel. 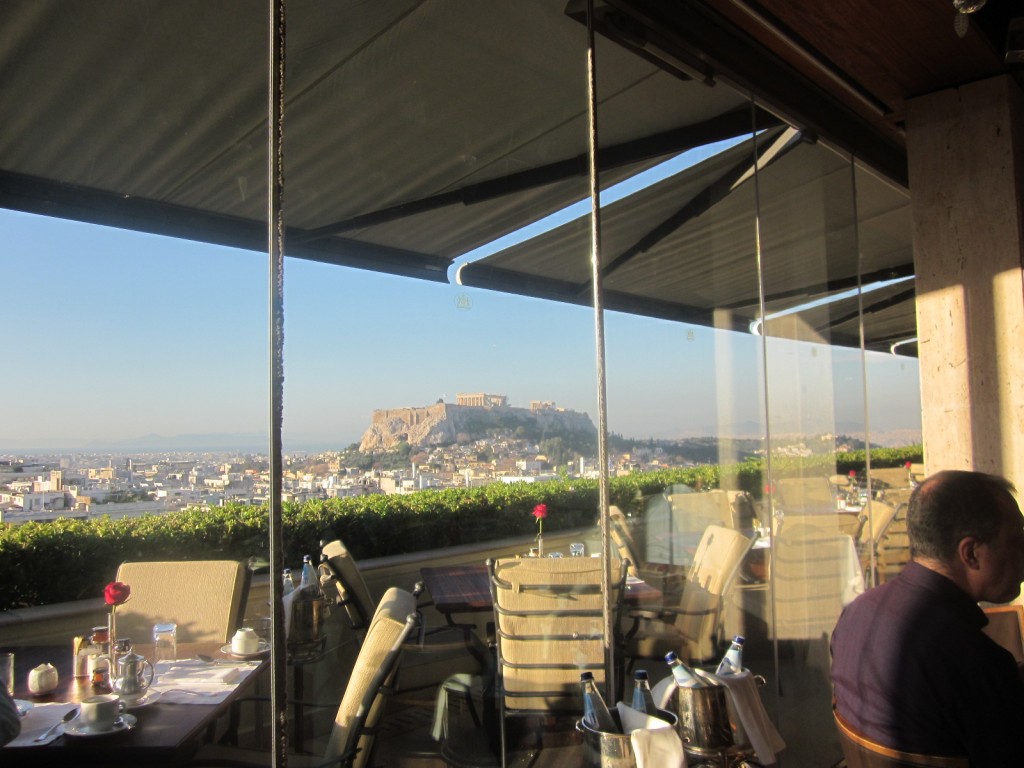 In the “Tudor Hall”, they served us sea bass carpaccio, cod and variation in okra, mini veal filled “Sofrito”. 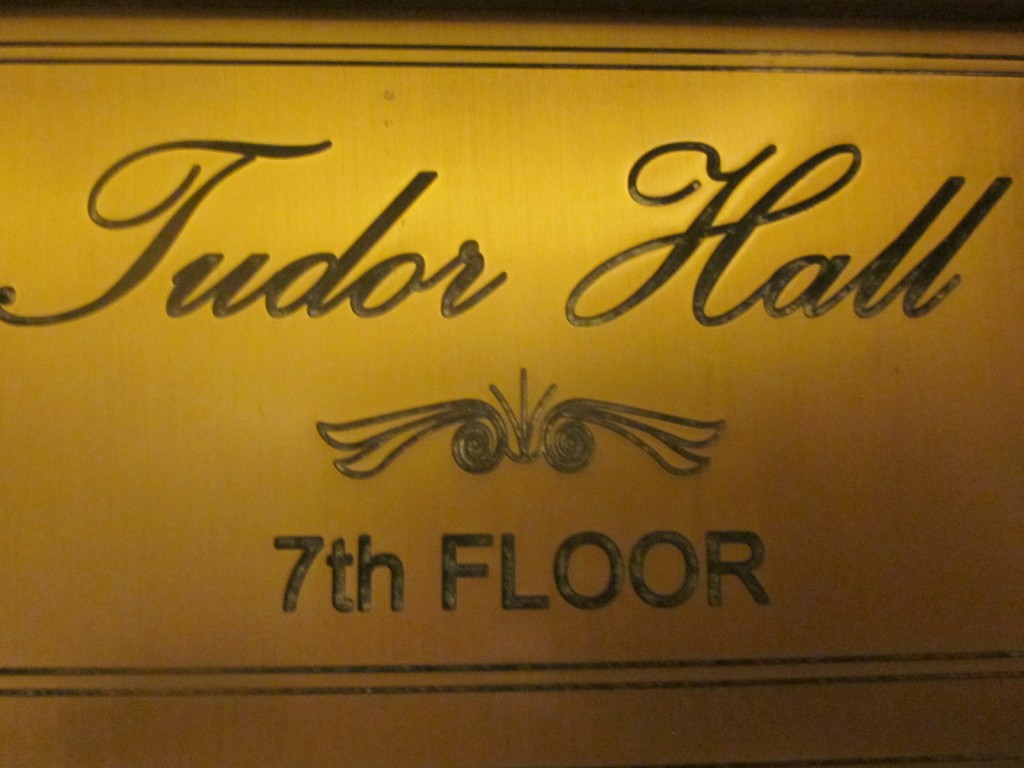 Having enjoyed the delightful menu in a wonderfully elegant ambience.

The food at the tavernas around the area are really good up to Michelin starred standard. 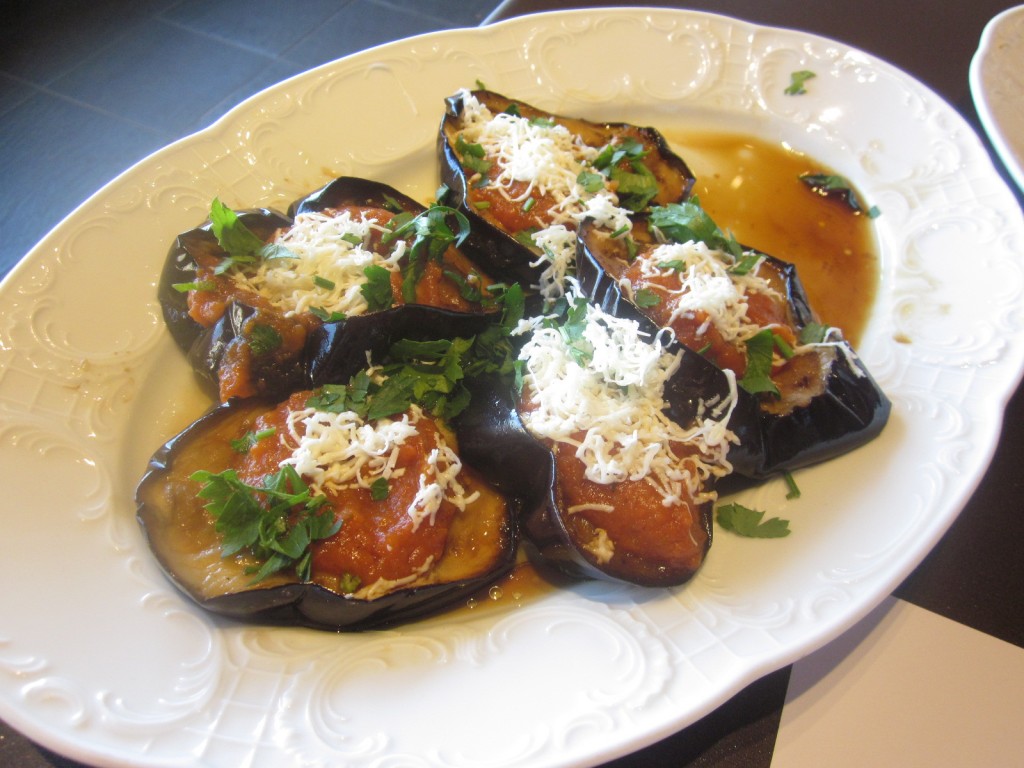 After an exciting day The Spa is an an oasis of tranquillity and relaxation at the heart of Athens.
With holistic treatments, beauty treatments, gym, sauna, steam and pool leaves no wishes unfullfilled.

Hotel Grande Bretagne is for me sophisticated style at its best.

However, there is always something to complain about, wherever one my be.
So, the air-conditioning cannot be turned off properly, which is often the case in top class hotels.

It is a place for hotel lovers.

The press trip was supported by