Today we are in Zurich. We checked in @the legendary “Dolder Grand”.
Yes, it is one of my favourite locations when you are looking for exclusivity and relaxation.
The hotel offers 173 luxurious rooms and suites, a beautiful, exquisite cuisine and the perfect spa.

History: The original “Curhaus” dating from 1899 presents itself anew as the luxury-class City Resort. The hotel’s elevated location, between the pulsating life of the city and a refreshingly natural green zone, provides a magnificent view of the city of Zurich, the lake and the Alps.

The century-old Dolder Grand was impressive enough as it was, but it entered a new league following a massive renovation by the British architect Norman Foster.
This isn’t just a new interior for an old hotel, but a complete re-design, with a bold contemporary addition wrapping around the original turreted hilltop château.

Inside, it’s almost unrecognizable. Rooms in the main building and the new wings alike are spacious, the design restrained and contemporary, the amenities completely up to date, right down to the enormous marble bathrooms. There’s nothing aggressively edgy or avant-garde about it, but neither is it at all business-hotel drab — in fact this just might be the state of the art in high-end luxury hotels.
It’s intended as something of a “city resort,” and the location, high on a hill just outside of central Zürich, goes a long way in creating that away-from-it-all atmosphere (while still just a taxi ride away from the city center). 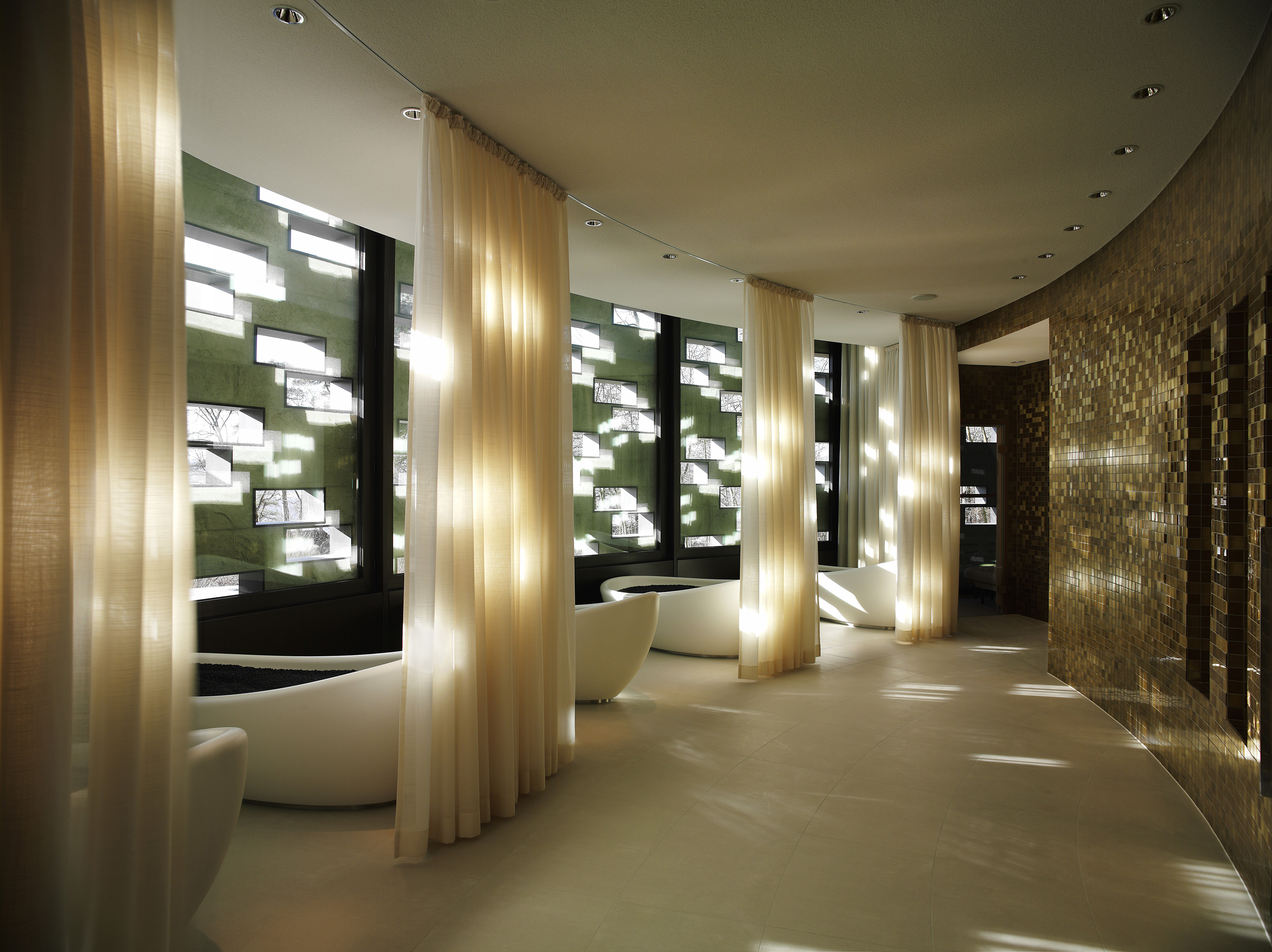 The massive spa and wellness center is the perfect place to relax in style.

And while the ordinary rooms and suites are already extraordinary, both in style and luxury, it’s the signature suites that are truly jaw-dropping. Each is by a different designer, each sprawls over hundreds of square meters, and each one comes with extras like steam showers, whirlpool baths, in one case even a grand piano — it’s no exaggeration to say these are some of the most impressive hotel suites we’ve ever seen.
The Dolder Grand is a 5* plus superior hotel in Zurich, it is connected to central Zurich by road, and by the Dolderbahn rack railway, which has its upper terminus next to the hotel complex.

Opened originally as a health spa before it became a luxury hotel. It had an renovation and enlargement were led by the famous architect Norman Foster. 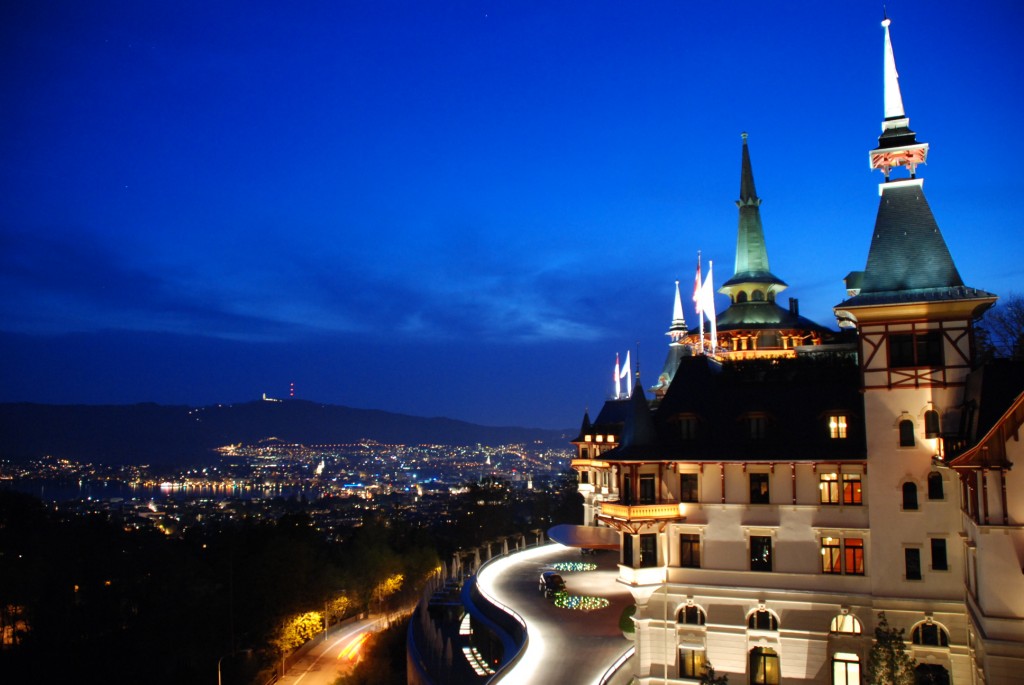 The restoration maintained the original appearance from 1899, and several buildings that were added in the 1920s were removed. Additionally, there were two new wings added, adjancent to the old building. Under the old foundations there were two additional floors added. Not only the architecture, but also the hotel concept went back to its origins.

Special stories, watch out for Rihanna she was in the Dolder Grand 8/12/2012 and on the famous Dolder open air ice rink – together with a bottle of whisky and her friends…
Built in 1930 and covering some 6000 square metres, the Dolder open-air ice rink is the largest one of its kind in Europe. For many years now, the rink has been Zurich’s most popular venues for ice skaters of all ages.

Resto tip #1: The Restaurant @ The Dolder:

Switzerland an oasis in heaven for all of our senses.

Chef de Cuisine Heiko Nieder is one of my favourite cooks.

You must try the “12 course tasting menu” – local products, tuna, marinated beef, everything in excellent quality.

If you travel: Resto tip in Switzerland: Schauenstein

Schauenstein is located in the Swiss Alps, an alpine village of 700 inhabitants. It is about 100 kilometers from Zurich, which by train can be reached in two and a half hours: from Zurich airport change at Zurich central station and take the train to Chur (the oldest town in Switzerland) then change again to reach the station of Thusis, which is a few miles from Furstenau. It is a lengthy journey but a scenic one, as the train goes past an impressive lake and then heads into the snow-capped mountains. The final leg of the train ride is the so-called Glacier Express, which serves assorted famous ski resorts such as Davos. Its name proves that the Swiss do, after all, have a sense of humour, as it should really be called the Glacial Express based on its true velocity. The scenery it passes is certainly very pretty, and you have plenty of time to admire it.
The wine cellar has around 3,000 bottles, presented in a thick tome. There was a wide selection of Swiss wines, but also plenty of the classics.
Lets talk food and fine dining:
Canapés included rocket sorbet with apple, with intense and well-balanced flavour. A potato and leek soup also had plenty of flavour.
Churros were excellent, with a spicy dip, while the best nibble was char, served on a cracker, simple but tasting superb.
Bread was made from scratch in the kitchen, a soft, doughy white bread, served warm with local butter. Just delicious.

Our first amuse-bouche was langoustine from Brittany, pan-fried and also served raw, with basil mousse and lemon espuma. On the side were delicate rice crisps and a lovely langoustine jelly with lime foam; the langoustines were of high quality, the lemon and lime elements works brilliant togehter.
Tuna and cucumber in various forms now appeared, including some raw tuna with avocado foam. Some tuna was seared, some served as sashimi, some marinated, each with different preparations of cucumber; all were of excellent quality.

Yummy and for me enough, just a small dessert.
It was marinated mango and pineapple, refreshing, with passion fruit and mascarpone sorbet, but on the side was a dish of spectacularly rich chocolate fondant.
All dishes were well balanced, with appealing combinations of flavours, and some surprises mixed in with the familiar.