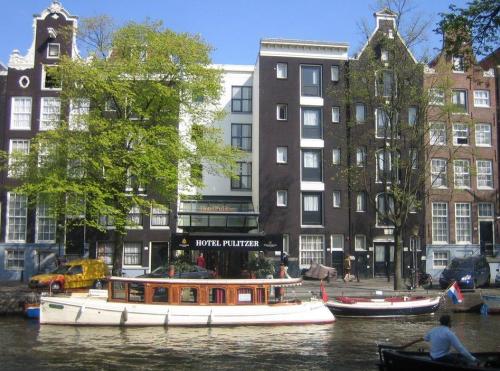 I love the city and just to be in A’dam makes me happy.
The Pulitzer hotel is my #1 location.
It gives you a great view on the canals, sprawling, though ever so elegantly, across a staggering 25 canal houses, it is an ideal destination for indulgent getaways. Guests can arrive by boat, rooms are big and stylish, and there are top-notch facilities, including a Gordon Ramsay restaurant. And everywhere in the hotel there are antiques galore and glistening marble.

There is a lovely garden at the back and, in August, the hotel is home to the Grachtenfestival of classical music, which occurs in and around the premises. The final concert, which takes place on a pontoon outside and is attended by hundreds of bobbing boats, is a delight to hear and see.
Dozens of Amsterdam museums are devoted to the fine arts, which the Netherlands has pioneered for centuries. Rembrandt, a household name, has his own dedicated museum, the Rembrandt House Museum (Museum het Rembrandthuis), whose restored interior reproduces the atmosphere of the artist’s former residence. But it’s the Rijksmuseum, one of Amsterdam’s top museums, where his classic “De Nachtwacht” resides, beside thousands of invaluable masterworks across the scope of Dutch art history.

Amsterdam is for lovers of modern art: its most-visited museum, the Van Gogh Museum, is a tribute to the painter whose inventive technique and sympathetic subject matter has earned him countless admirers.
Furthermore “The Stedelijk Museum” is a can’t-miss destination for modern art enthusiasts, its Erezaal “Hall of Honor” shows works from Henri Matisse, Piet Mondrian, Yves Klein and other artists.

Later on you should try the Cafe-Bar-Resto “Pulitzer”. Try a “coffee verkehrt”
and drink a Heineken. Keep it simple.

For the perfect F&B event, my resto tip in A’dam: The “Ciel Bleu”

The restaurant is on the 23rd floor of the Japanese owned Okura hotel in Amsterdam. The picture windows across one side of the dining room give a fine view over the city. The dining room is luxurious, with generously spaced tables set out with fine linen tablecloths, and comfortable chairs.
The wine list stretches over 19 pages and is very well chosen, with excellent growers from around the world.

An array of nibbles appears as you browse the menu. We started with cannelloni of green apple and caramel with goat cheese and dried figs. It was refreshing but best was a “shake” of sweet and sour cucumber with green apple mousse and a dried mushroom, which had great depth of cucumber flavour. Yummy, the dutch would say lekker.

First up was a shell crab with avocado and beansprout salad, alongside langoustine with a spicy mango chutney. The soft shell crab was very good with a clever mix of tastes. Next was a cornetto of scallop with truffle mascarpone, served alongside a single cooked scallop with green pea coulis and black truffle, and a Parmesan mousse. The scallop itself was beautifully cooked. I enjoyed it.

Strips of cod were garnished with almonds, garlic and coffee and served alongside a warm foam of “belle de Fontenay” potatoes and horseradish. I never find cod the most exciting of fish, so overall for me the dish was just nice.
For the main course, saddle of roe deer was served with black pudding cream, cannelloni of green cabbage and dried ribbons of venison with clove jus. The deer itself was excellent, though perhaps this dish had a flavour more than was really needed.

We had cheese, of course, we are in Holland and ice cream with star anise, white chocolate ice cream, mango and soufflé of vanilla and coconut ice cream. It finished off the meal.

Overall I feel this is a fantastic two star level restaurant, the Chef was engaging and clearly passionate about his job.

Give it a try, its worth it, especially when you are interested in architecture.

Dui, meet you on Prinsengracht in A’dam.
James Bond was here.