The french designer Pierrejean creates its second generation of superjumbo suites.
A series of concepts to convey a luxurious ‘five-star feel’ of what commercial first class could be like.
He is well-known and made his name designing luxury yachts and interiors for private and commercial aircraft – and he clearly brought those exclusive influences into these inspirational treatments.

The upper deck of the Airbus A380 was reimagined with a lobby-style entrance and a standing bar for drinks and snacks, gently illuminated by light and dressed with oriental orchards for a subtle Singaporean touch.
Plush curtains opened to the first class cabin, which in Pierrejean’s vision included this elegant private dining room. These ideas were meant to spark the imagination and challenge conventional notions of first class, which for Singapore Airlines at that time took the form of the small private suites which debuted on the world’s first Airbus A380.

As the project progressed, the concepts became more grounded and Pierrejean zeroed in on transforming this space into a room all its own. “Our concept was the idea of a passenger who stays at a luxury, he should find this type of hotel room on the flight… 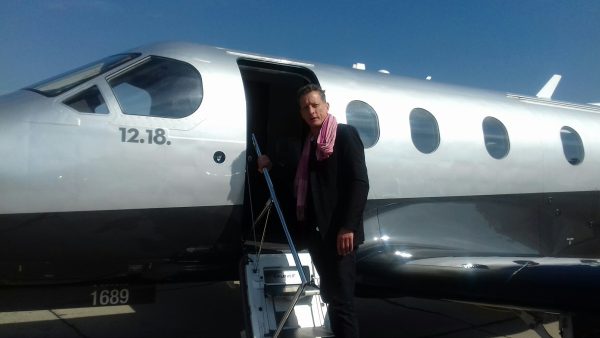 “In this way, as per a hotel room, you can live onboard free to rest, to sleep, or to work at any time without be disturbed by the general cabin lighting of the aircraft or your neighbours,” he elaborated.

Pierrejean’s work drew closer to what Singapore Airlines eventually unveilled, in what was internally dubbed the ‘Skyroom’. Again, here is Pierrejean’s treatment of two first class suites joined together to create a double room with a double bed, followed by the ‘double suite’ as realised by Singapore Airlines.