The Michelin star is the highest honour within the international culinary industry.

Chefs all across the world dedicate their lives to earning just one coveted star in recognition of their excellence. But there are those select few who have managed to collect an number of stars in their constellation of fine dining restaurants.

Considered by many to be one of the best chefs in the world, he’s built a business empire over the years with 36 restaurants spanning across the globe. He’s also one of only two chefs to hold 21 Michelin stars throughout his career and the first chef to own restaurants carrying three Michelin Stars in three cities.

In addition to being known for world-class French cuisine, Ducasse is the only chef on this list who has sent his food into space. In 2015, Ducasse sent meals to astronauts orbiting Earth aboard the International Space Station, an accomplishment that Ducasse said he viewed as conquering ‘ the final frontier of cooking)’.

Dine at Alain Ducasse At The Dorchester

Another renowned French chef, Pierre Gagnaire has spent his 40-year career collecting Michelin stars. Growing up in his family’s Michelin-star kitchen, he received his first star when he was just 26 and hasn’t stopped since. This iconoclastic chef is said to be ‘at the forefront of the fusion cuisine movement’ by the Michelin guide, famous for tearing down the conventions of classic French cooking.

Gagnaire’s eponymous flagship restaurant in Rue Balzac in Paris has maintained three Michelin stars for more than two decades, a true feat in the culinary world. Today he oversees 18 gastronomic restaurants around the world, including Sketch in London, one of Mayfair’s top Michelin star restaurants.

As the world’s third most decorated Michelin star chef, Martin Berasategui currently has twelve stars under his belt, more than any other Spanish chef. He’s also one of a select few chefs in the world who have two triple Michelin-starred restaurants to their name.

This exceptional Basque chef earned his first Michelin star at the age of 25 for his first restaurant, Restaurante Martin Berasategui. The celebrated restaurant was awarded a third Michelin Star in 2001 has been on the World’s 50 best restaurants list for 6 years​.

Over the course of 44 years, Berasategui has opened three other Michelin-starred restaurants in Tenerife and Barcelona. He also owns six other restaurants around the world in the Dominican Republic, Mexico and Costa Rica. He is considered to be a legend in the world of traditional Basque cuisine and one of the top chefs in the world.

This French chef is not just about getting stars. Since 2013, Yannick Alléno has been carrying out research and development on French cuisine to the point of starting his own culinary movement, named Modern Cuisine. As part of his research, he closely studied sauces and even patented a technique, Extractions®. Yannick says that this process allows the concentration and perfection of flavours, providing them with texture, a long finish and minerality.

Anne-Sophie Pic is the female chef with the most Michelin stars, holding eight stars across her five restaurants.

This French chef had no formal culinary training when she assumed leadership of her family’s restaurant Maison Pic after her father’s death in 1997. After earning three stars for the restaurant, Pic opened up a second restaurant, Restaurant Anne-Sophie Pic, which celebrates her family’s culinary lineage from Valence. It aims to demonstrate the inventive innovative spirit that, as the Michelin Guide itself says, “binds the history of the Pic family with that of French gastronomy.”

Chef Gordon Ramsay, one of the most famous chefs in the world

Known for his volatile kitchen demeanour and exceptional British cuisine, Gordon Ramsay is arguably the most famous chef in the world. Although he’s been awarded 16 Michelin stars throughout his career, he currently holds seven. His signature restaurant, Restaurant Gordon Ramsay in London, has held 3 stars since 2001, making it London’s longest-running three Michelin-starred restaurant.

The Scottish born chef, restaurateur, and television personality is attached to 35 restaurants globally. He’s made his way onto television screens in just about every part of the English-speaking world, creating a highly successful empire. In 2019 Gordon Ramsay was the 35th highest-earning celebrity in the world on Forbes list; one up on Rihanna. As of 2020, Gordon Ramsay’s net worth is estimated at $220 million, most of which comes from his popular TV shows like Hell’s Kitchen, Kitchen Nightmares and Master Chef.

The Michelin guide might not be the ultimate honour amongst chefs in the United States, but Thomas Keller has gone about setting a fine example. He’s the most decorated chef in America, currently holding 7 stars. He’s also the only American chef to hold all six out of his total seven stars simultaneously.

One of his five restaurants, three Michelin starred The French Laundry, recently celebrated its 25th anniversary and was on two occasions deemed the best restaurant on the planet. Keller, a California native, is widely celebrated in America for his French-style cooking, and he has made a good name for himself in France. Safe to say he’s one of the best chefs in America.

With four restaurants across the world and 7 Michelin stars, this Japanese chef is a culinary icon has been promoting Japanese cuisine for nearly 50 years. Considered as the master of kaiseki cuisine, in 2020 he was named the recipient of the prestigious American Express Icon Award as part of Asia’s 50 Best Restaurants awards programme.

Murata is the third-generation owner of his family’s century-old three-Michelin-star ryotei [high-end Japanese restaurant], Kikunoi in Kyoto, where he pays tribute to his forefathers’ classic kaiseki cuisine through a fresh and modern approach.

Taking his expertise international, Murata’s latest venture is Tokimeite, an authentic Waygu restaurant in Mayfair. The expansion of his culinary empire into Europe is not the only sign of his global success. Heston Blumenthal, another Michelin-starred chef on this list, studied under Murata in Japan when he was 30 years old. The famous British chef considers Murata to be an influence on his cooking style.

One of the most iconic Japanese chefs of the century, Seiji Yamamoto famously sent an eel for a CT scan to better understand its anatomy. Besides his commitment to understanding the science of cooking, he is known for blending the revered cooking traditions of kaiseki with modern molecular gastronomy techniques.

Since its opening, Yamamoto’s Tokyo restaurant Ryugin has become became a destination for other culinary geniuses, including Joël Robuchon. He now commands two overseas branches, one in Hong Kong and the other in Taipei, both of which have featured on Asia’s 50 Best Restaurants list.

As one of Japan’s gastronomic luminaries for more than a decade and a half, his cooking style aims to reflect the preciousness of Japanese delicacies, turning simple ingredients into works of art. In 2019 he was voted as the first-ever winner of the American Express Icon Award, a nod to his contribution of integrating avant-garde cooking with classic Japanese traditions. 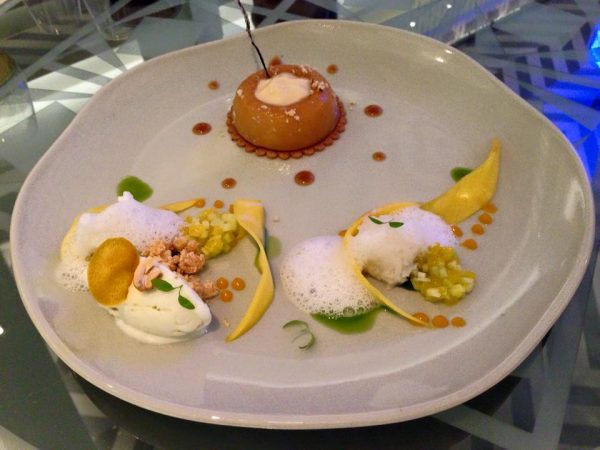 Multi-award winning Swiss Chef, Andreas Caminada, started his career as a humble pastry chef. But at the young age of 26, he took over as tenant and chef de cuisine at Schloss Schauenstein, a historical castle restaurant in the Swiss Alps. Since then, the restaurant has achieved unparalleled success, having been awarded 3 Michelin stars and 19 Gault Millau points.

Caminada owns 2 other Michelin-starred restaurants, IGNIV by Andreas Caminada at Grand Resort Bad Ragaz and Badrutt’s Palace-Hotel. The latter is only opened during winter and is run by Marcel Skibba, Caminada’s deputy at Schloss Schauenstein.

Heston Blumenthal needs little introduction. Arguably one of the most famous chefs in the world, this celebrity chef-proprietor holds 6 Michelin stars. He’s even been awarded an OBE by Her Majesty the Queen for his services to gastronomy.

Blumenthal, like a few other chefs on this list, is fascinated with the science behind food. He is known for experimenting with food pairing, the science of identifying molecular similarities in different ingredients and combining them in a dish.

Although this innovative chef discovered his love for cooking at a young age, he worked a variety of jobs before settling into his calling. While working as a repo man and a credit controller, Blumenthal taught himself the art of French cooking in his free time. The turning point in Blumenthal’s career came in 1995 when he opened his restaurant The Fat Duck in Bray, Berkshire. In 2005, The Fat Duck was named the best restaurant in the world, famous for its fourteen-course tasting menu featuring dishes such as nitro-scrambled egg and bacon ice cream.

Japanese chef on the list, Masahiro Yoshitake has managed to rack up six Michelin stars with just two restaurants. Interested in promoting Japanese cuisine beyond California rolls, his Tokyo restaurant Sushi Yoshitake is an intimate seven-seater sushi bar which he runs with a team of four, his wife managing front of house.

His highly acclaimed restaurant was awarded three Michelin-stars in 2012 and is currently the only Michelin 3 star omakase in Tokyo. Omakase is a Japanese phrase that means “I’ll leave it up to you”, a common practice in Japan which allows the chef to showcase seasonal ingredients through a series of inventive dishes and special sushi. Taking photographs while dining isn’t permitted, allowing diners to experience the complete dedication from Yoshitake and his team. Since then Yoshitake has expanded to Hong Kong, opening Sushi Shikon in Landmark Mandarin Oriental which has been awarded three Michelin stars each year since 2014.

Chef Heinz Beck is perhaps best known for being the man behind Rome’s only three-Michelin-starred restaurant, La Pergola. Beyond an excellent career as a highly decorated chef, Heinz has been heralded as a leader in Italian and Mediterranean culinary tradition.

He’s known as one of the first chefs to recognize the importance of healthy food, putting consistent attention towards health and innovation in the gastronomy field. For more than 15 years, he has collaborated with international scientists and Italian universities to better understand the good balance between food and health. In his quest for lighter cooking, Beck places great emphasis on health and nutrition, carefully observing how food effects on the body.

Together with 10 other Italian chefs, Beck has founded The Order of the Knights of Italian Cuisine to communicate with national and international institutions and the media as a united front.

At 24, Jordi Cruz became the youngest chef in Spain and the second youngest in the world to receive a Michelin star. Since then, Cruz has gone on to win many other awards and now has 5 Michelin stars to his name.

Cruz leads ABaC Restaurant, highly regarded as the gastronomic reference of Catalan. Under Cruz’s leadership and guidance, the restaurant now holds 3 Michelin stars. ABaC’s concept is simple: tradition, modernity and product. Using high-quality fresh ingredients, the kitchen elegantly marries tradition and creativity. What is placed in front of diners is the result of numerous hours of testing and experimentation in front of the stove.

As a kid, this Spanish chef had dreams of becoming a footballer. However, his true passion was revealed after he started working at his family’s tapas bar at the young age of 12. From there, Perez continued to train at various restaurants. Today, he is one of the top inspirations for state-of-the-art 21st-century cuisine. In particular, he is known in the culinary world for his two-Michelin-starred restaurant Miramar, a beautiful restaurant by the Mediterranean.

The Miramar story is a family affair. Established in 1939 by Albacete and Alfons Serra as an inn with 45 rooms, it was only in the 1990s did Miramar begin to transform. This happened when Perez fell in love with Montse Serra, the granddaughter of the founders. As a couple, they converted the place into a fine dining venue with just 5 exclusive rooms for guests, and the rest is history.