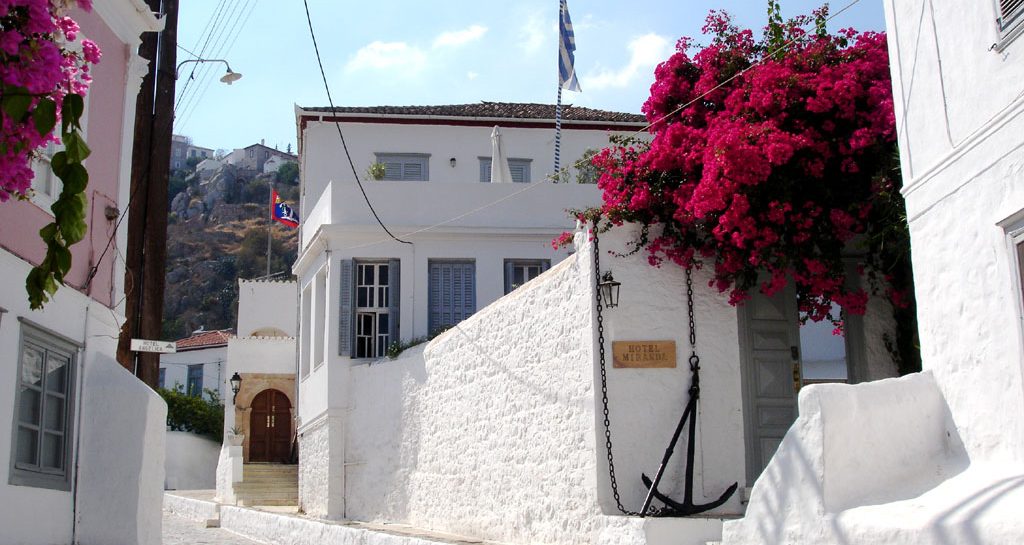 I love Greece. Arriving on this picturesque gem of an island is like stepping into a painting. 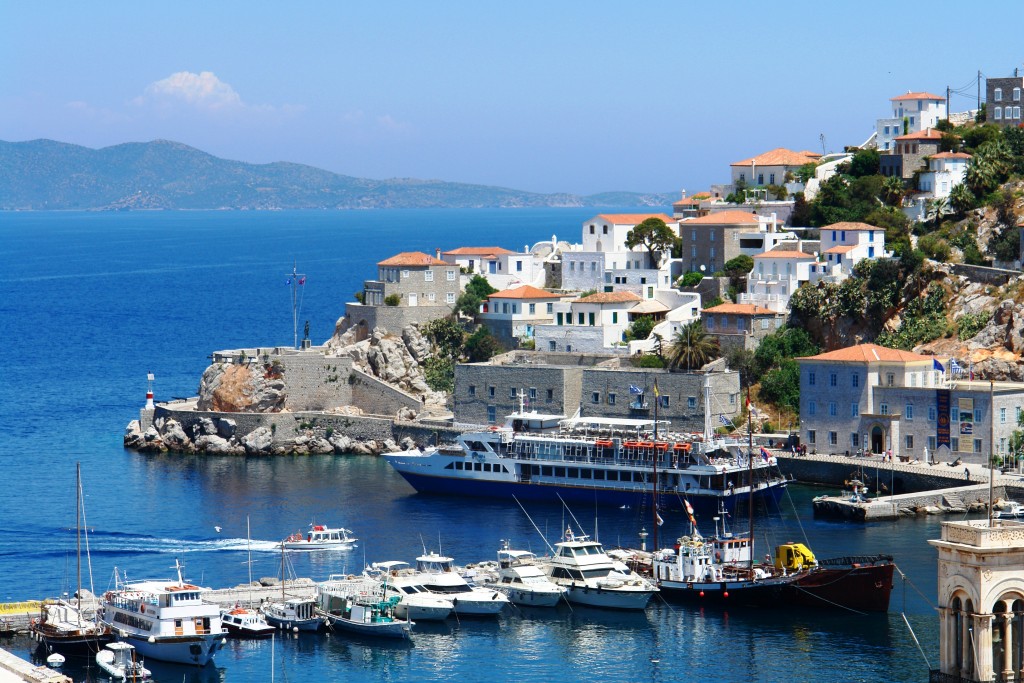 The distinctive neo-classical stone mansions of Hydra Town rise above the picture-pretty port, where cafés and donkeys await their next expedition along cobbled lanes. 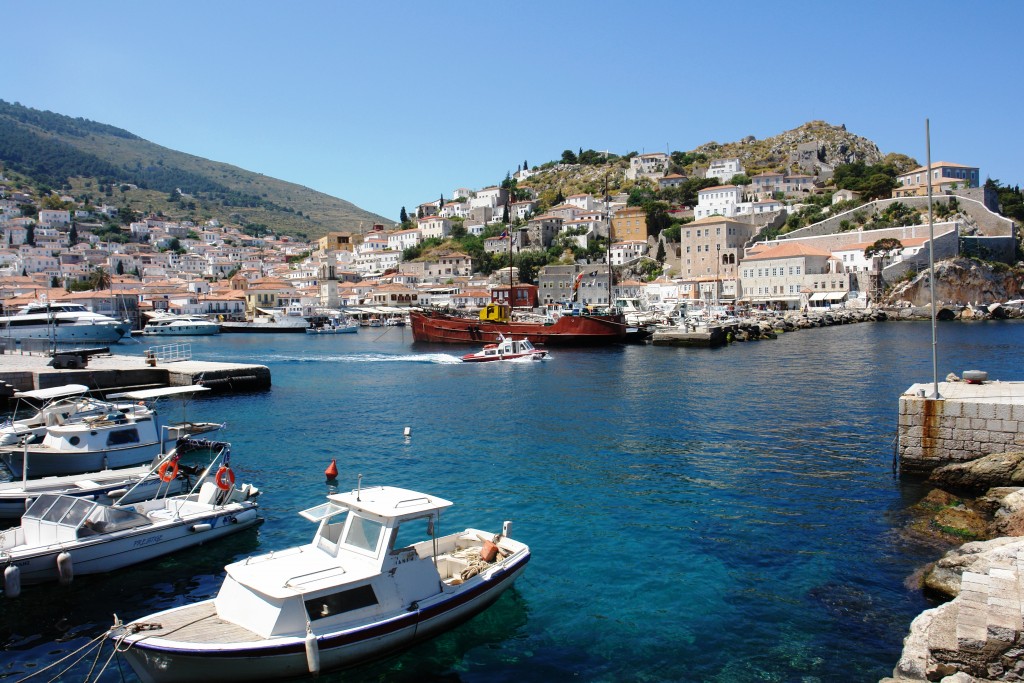 Hydra is twice the size of neighbouring island “Spetses” but has an even smaller population of around 4,000 people. So nice to here on Hydra in the region Attica.

The beautiful eco island with many claims to fame. Just covering about 50 square kilometres it  has one of the most picturesque harbours in the Aegean, astonishingly for a place only 60 kilometres from Athens, its primary mode of transportation remains the donkey. 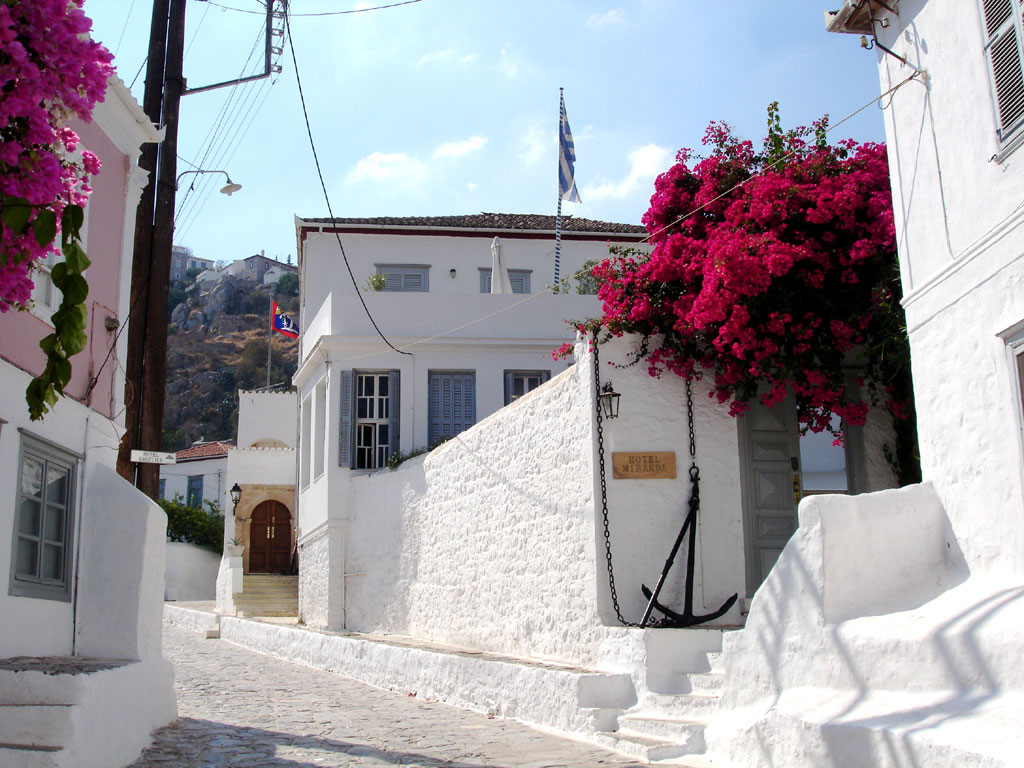 Hotel Miranda is originally a wealthy sea captain’s mansion was built in 1810.
It has been declared a building of National Heritage by the Ministry of Culture, as it is considered an especially fine example of characteristic Hydriot architecture. So Hotel Miranda -with its fine collection of 18th and 19th century furniture, prints and paintings – creates a charming atmosphere and the character of a museum. Several art exhibitions of a high standard take place annually in the Miranda Art Gallery.

But not only for music fans, it is the island, where Leo met his Marianne.

Furthermore the Canadian poet singer still has a house on Hydra.

A living legend in gravel-voiced lugubriousness, Cohen was a near-permanent resident on the island in the 1960s and still visits occasionally. Ironically, the British climate can claim much of the credit for his decision to move to Greece.

On a rainy afternoon in the Sixties Leo found himself wandering bleakly around London’s East End, his spirits further depleted by raging toothache. Then he spotted a Bank of Greece sign on Bank Street, entered the bank and asked what the weather was like in Greece and was assured it was already springtime. On the spot, he decided to pack his bags.

Arriving in Athens on 13 April 1960, Cohen took a boot to Hydra, the destination wasn’t random, he’d heard from friends that there was a flourishing group of expat artists and writers on the island. In that respect it was an obvious destination for an itinerant poet. But, for a city-dweller, living conditions could hardly have been more different.

There was little electricity, plumbing or running water. Houses were lit by kerosene or oil lamps; water was collected in cisterns, or drawn at the Kala Pigadia meaning “good wells” site above the port; records were played on a battery-operated player. Cohen loved the simplicity of the island. The quality of the light delighted him: “The sun’s all over my table as I write this… I can taste the molecules dancing in the mountains”.Cohen found himself drawn to the island’s colony of English-speaking artists. As is the way with such communities, they adopted a local establishment as a hub. This was not a cafe but a grocery shop on the harbourside.

The bohemians crowded round six wooden tables, carousing, declaiming and arguing into the night, amid lengthening columns of empty wine bottles. It was here that Cohen performed his first formal concert. And it was here that he met Marianne Ihlen, the beautiful Norwegian who was to become his partner for most of the decade. Their parting was commemorated in the classic anthem So Long Marianne.

Later on when he bought his own house on the island, Marianne moved in with him. A photo on the back cover of the album Songs from a Room shows her typing at a table on Cohen’s battered Olivetti, smiling in half-embarrassment at the camera. Wow, thats a love story.

For spectacular sea views, follow Boundouri, a pebbly path winding upwards from the port to the fishing village of Kamini. Alternatively, climb the mountain from town to the Monastery of Profitis Ilias, the adjacent Convent of St Efpraxia and the nearby uninhabited Monastery of St Triada – views from the top make up for the one-hour trek.

Mandraki and Vlichos are the best beaches near the main harbour, but for more secluded spots, head to Bisti and Agios Nikolaos on the west of the island or Limioniza in the south.

If you are travelling and flyin out from Athens, our resto tips:
The unknown resto or better basement taverna on the corner of Sokratous and Theatrou at the bottom of the fruit and vegetable market. There are no menus but you can look around and see what everybody else is eating. It’s almost like a private club and it is a little intimidating.
The wine list 6 the wine is great. It comes sometimes without even asking for it.
The grilled fish was incredible. We tried all kind of vegetables with bread, different soups and on the other tables it looked fine as well.
Another traditional estiatorio at # 3 Sokratous Street is the brand new Meidani right by the corner of Evripidou Street.
So, the perfect lunch address, great red wines and a very large -fine- menu which includes just about every Greek oven dish you can think of plus bakaliaro me skordalia, podi, and some salads.
Unfortunately it is only open in the daytime. If you are in the mood for a fine air-conditioned restaurant with a large traditional menu and a few interesting entrees that will satisfy you.

Yassou! Hydra is waitin for you.