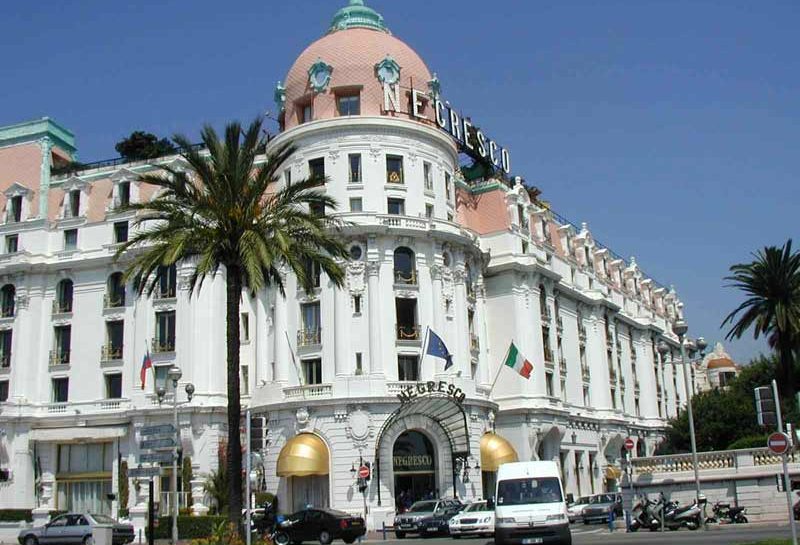 Promising romantic hours near the sea 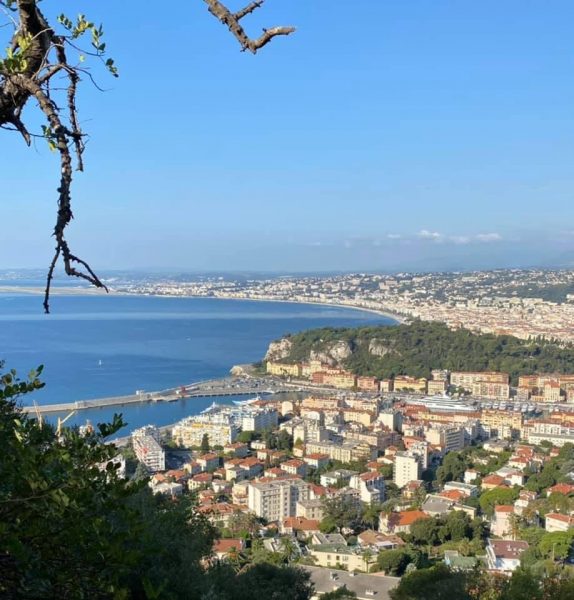 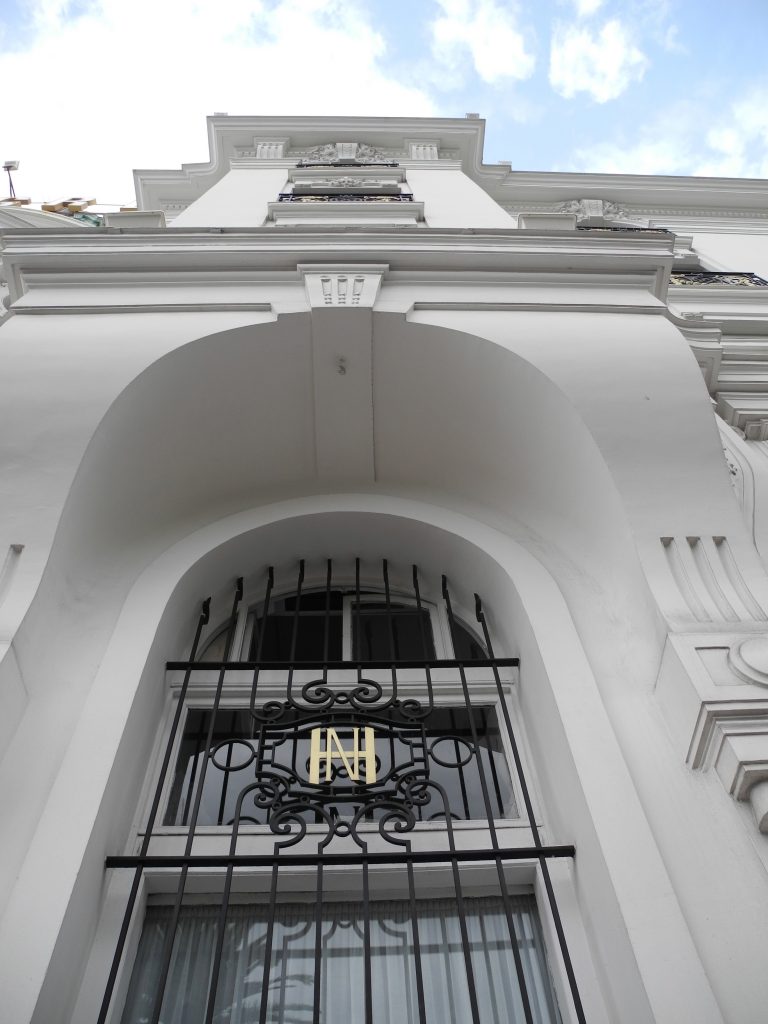 The Hotel Negresco features breathtaking early 20th-century architecture and a enviable seafront location.
Over 100 years long it is overlooking the Promenade des Anglais.

Truly a legend on French Riviera.
Bedrooms are the last word in luxury and magnificent works of art and antique furniture abound. The hotel belongs to Jeanne Augler, you may bump in her in the hallways. 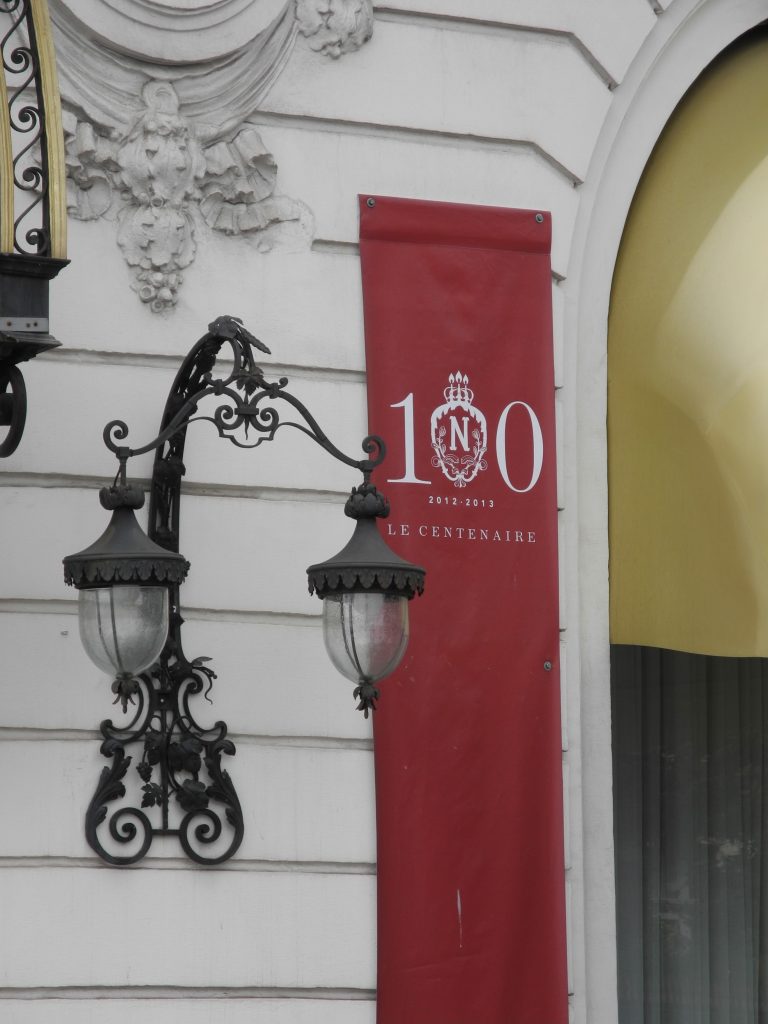 Its located on the Promenade des Anglais on the Baie des Anges in Nice, France and was named after Henri Negresco who had the palatial hotel constructed in 1912.

In keeping with the conventions of the times, when the Negresco first opened in 1913 its front opened facing the Mediterranean sea. Henri Negresco, left home going first to Paris then to the French Riviera where he became very successful. As director of the Municipal Casino in Nice, he had the idea to build a hotel of luxury that would attract the rich and famous. After arranging the financing, he hired the great architect of the “café society” Édouard-Jean Niermans to design the hotel and its now famous pink dome.

The spectacular Baccarat 16,309-crystal chandelier in the Negresco’s Royal Lounge was commissioned by Czar Nicholas II, who due to the October revolution was unable to take delivery.

Henri Negresco faced a downturn in his affairs when World War I broke out and his hotel was converted to a hospital. By the end of the war, the number of wealthy visitors to the Riviera had dropped off to the point that the hotel was in severe financial difficulty.

Over the years, the hotel had its ups and downs, and in 1957, it was sold to the Augier family.

Madame Jeanne Augier reinvigorated the hotel with luxurious decorations and furnishings, including an outstanding art collection and rooms with mink bedspreads. Noted for its doormen dressed in the manner of the staff in 18th-century elite bourgeois households, complete with red-plumed postilion hats, the hotel also offers renowned gourmet dining at the Regency-style Le Chantecler restaurant under its new chef Bruno Turbot, brought in from Normandy when previous chef Alain Llorca took over the equally fabled Moulin de Mougins.

In 2003, the Hotel Negresco was listed by the government of France as a National Historic Building and is a member of Leading Hotels of the World. The Negresco has a total of 119 guest rooms plus 22 suites.

Special story: The hotel walls are like art galleries displaying stunning work from Dali, Cocteau and Yvaral. Gourmets can choose to dine in the hotel’s Le Chantecler restaurant or top-class brasserie La Rotonde , which boasts an unusual carousel-style decor complete with wooden horses.

Among the many distinguished past guests of the hotel are Claudia Schiffer, Orson Welles and Michael Jackson.

If you are travelling in France and be in Paris, try the Arpege.

Alain Passard is one of the greatest chefs of France, and has held three Michelin stars since 1996. In his earlier career he became a two Michelin star chef at the tender age of 26 at Casino d’Enghien, in 1986 purchasing an existing restaurant (l’Archetstrate) from celebrated chef Alain Senderens, and renaming it Arpege, after the perfume from Lanvin. Passard caused a major stir in culinary circles in 2001 when he announced he was going to concentrate on vegetarian dishes, and although there are now meat dishes on the menu, vegetables are still the star. Passard gets his vegetables from his own dedicated farms and gardens in the northwest of France, shipped daily by train to the restaurant: they are of superb quality. 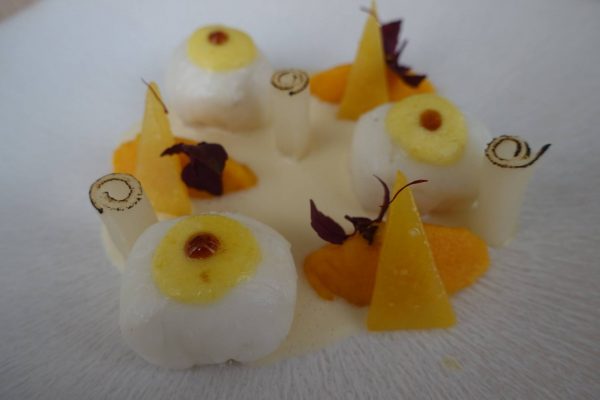 Arpege has a nice exterior in the 7th arrondisement of Paris. The dining room is simply decorated, with relatively small tables placed quite close together. The room is carpeted with some wood panelling along the walls. The only real luxury in the décor is the set of Lalique glass insets in the wood panels. The full-blown tasting menu was our project.

The wine list stretched over 30 pages, and was all French other than a single page of wines from elsewhere in the world, plus a few German wines. Mark-ups were not as high as in many top Paris restaurants, though they varied considerably through the list. Growers were top-drawer, although the dessert wine list was surprisingly limited, with a rather small choice by the bottle and just a single wine by the half bottle (and that one being Yquem). .

A set of little tartelettes appeared as we looked at the menu. A tartelette of Parmesan and celeriac featured superbly delicate pastry and celeriac with terrific flavour, as had tartlets of black radish. However even better were the tartlets of beetroot and parsnip puree, smoking of the beetroot in the process giving a fabulous flavour to the puree. This was an impressive start to the meal, immediately showcasing vegetables (10/10). Bread was excellent, made with natural yeast and served with butter from St Malo.

A long-term signature dish at Arpege has been the “hot cold” egg. An egg shell is the presentation vehicle for warm egg yolk with sherry vinegar and maple syrup, spices and a little salt, covered with a layer of cold cream. The key to the success of this dish is the quality of the eggs used and the perfect balance of the vinegar with the sweetness of the syrup, together with the blend of hot and cold temperature elements. A deceptively simple dish, and yet a lovely start to the meal

Next was a carpaccio of scallops with black truffles, pretty presented as alternating discs, garnished with rocket leaves and drizzled with olive oil. The scallops were of dazzling quality, their superb sweet flavour pairing well with the earthiness of the truffles. The best dish of the meal now arrived. Ravioli of vegetables rested in a consommé of Jerusalem artichoke and celery. Such a simple description does not do justice to the stunning purity of flavour that came through in the consommé. The ravioli was of flawless texture, the mixed vegetable filling of the pasta again showing off a quality of vegetables that is hard to imagine.
Yummy.
Next was a Parmesan gratin of onions with black truffle, another famous dish here, and another whose raw description does not do it justice. The Cevennes onions used here are the finest of all onions, having a mild, sweet flavour, here caramelised to further enhance their natural sweetness, the flavour combining beautifully with the Parmesan and top quality black truffles: terrific.

Next was zander with lime oil and green tea, with an orange and carrot mousseline. The fish was perfectly cooked. This was followed by a “vegetable couscous”. Yellow beetroots, red beetroots and radishes were given an extra textural element of semolina flavoured with nutty argan oil. Amongst this was a particularly impressive vegetarian sausage, the filling of red vegetables and spices creating an effect reminiscent of the taste of a meat sausage. Hmm.

The next dish was lobster from Chausey Islands / Coast of Normandy, which was presented at the table prior to the meat being extracted from the shell and served. The lobster was cooked in vin jaune made with a Jura wine and flavoured with truffle, served with smoked potato. As one might expect by now, the cooking of the lobster was flawless, the meat tender and having lovely flavour, the smoked potato and truffle flavours balancing the shellfish well,

Cheese is supplied by Bernard Antony of Alsace, and it was interesting see that Arpege does not serve a full cheese board, but selected just a couple in perfect condition, Moelleux du Revard and Gruyere in this case, served with more smoked potato. The main dessert was a magnificent chocolate millefeuille with exceedingly delicate pastry, a lovely and rich yet delicate dessert.

What is impressive to me is the simplicity of the cooking at Arpege. Many dishes have just two or three elements, but employing impeccable ingredients and put together with flawless technical skill. There is nowhere to hide with such cooking, but time after time in this meal I was struck by the remarkably purity of flavour of the dishes; here cooking is stripped back to its essentials. What a meal.